Since moving to Muskoka and making the drive to Bracebridge for groceries and supplies, etc, I have noticed a sign along highway 118 that says Huckleberry Rock Trail, but until today, I had not investigated it.  I was really glad I did because it’s a pretty nice place!

It was the day of the Tragically Hip concert, their farewell show in Kingston. I had originally had plans to go camping with some friends but things didn’t pan out, so I had taken advantage and not booked anything else as I wanted to see the Hip concert that night.  Since I had the day free before the show, I decided to get out and do a local hike and this was the perfect place. 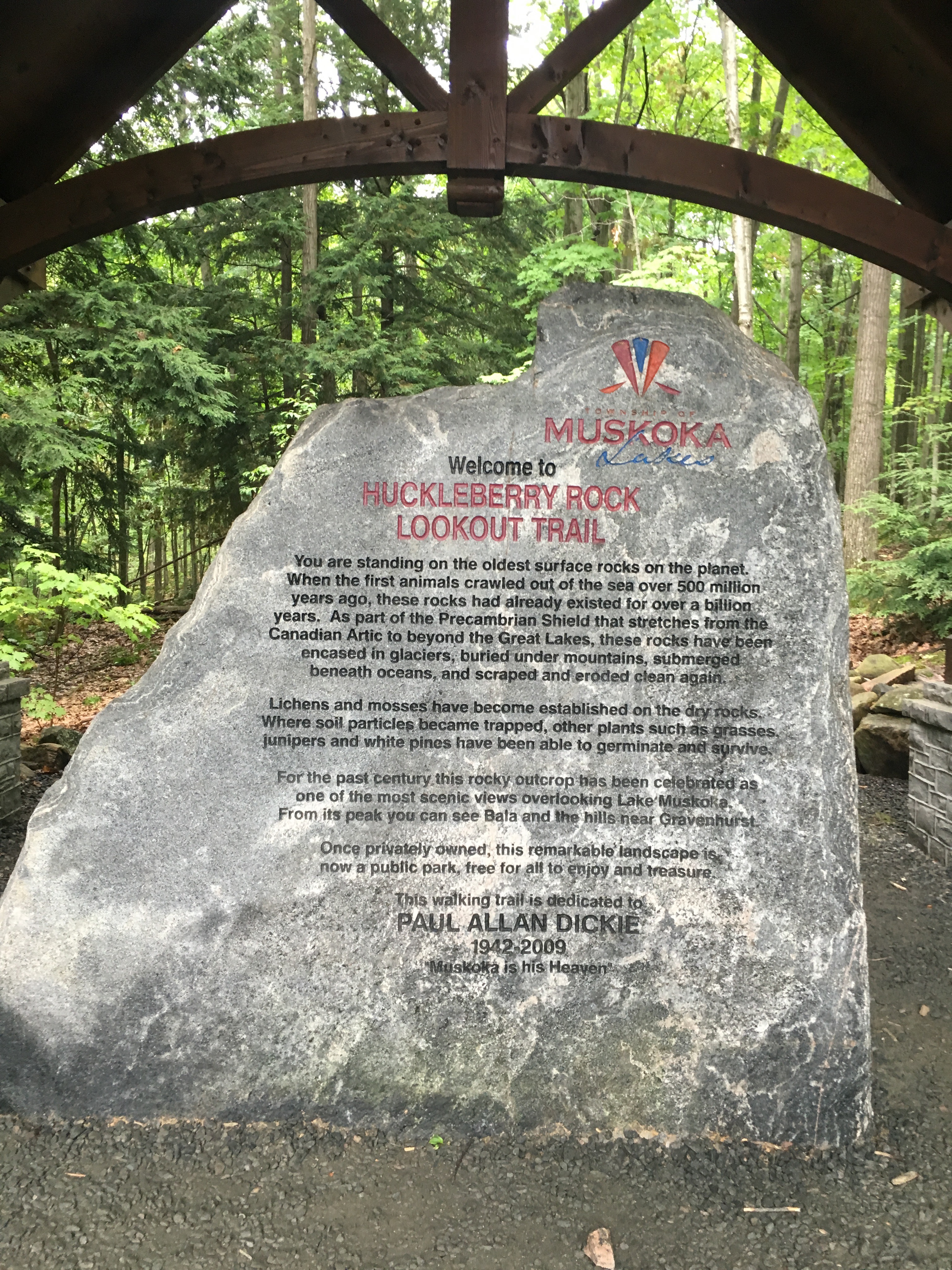 I stopped a moment to check out this huge rock which had been engraved.  It said that the rock I was standing on was the oldest surface rocks on he planet.  If you can’t make out the text I have written the first paragraph below.  I found it very very interesting. It goes on to explain further, however, I think you should check it out for yourself to read the rest!

“You are standing on the oldest surface rocks on the planet. When the first animals crawled out of the sea over 500 million years ago, these rocks had already existed for over a billion years. As part of the Precambrian Shield that stretches from the Canadian Arctic to beyond the Great Lakes, these rocks have been encased in glaciers, buried under mountains, submerged beneath oceans, and scraped and eroded clean again.”

I found the maps, took a few pictures in case I needed help finding  my way and headed on to the trail.  It was raining a bit but unnoticeable in the forest, so I didn’t care in the least.

Throughout the trail I found these plaques which is something I love to find on trails. They explain all about the vegetation you see along the way, the trees, rocks, area etc.  this one was describing the hardwood forests and I took a moment to stop and read it and check out all the information provided.

This trail was very cool almost from the start.  The very beginning was just a trail that looked like it used to be an old road, but very quickly after that it turned into rock and stayed that way throughout.  The picture above is all rock going up and it’s amazing how much it looks like someone created the path, but the path is entirely natural.

I saw a few pretty flowers on the way through and then the trail quickly opened up.

I took the video above of the view as I didn’t really know where the top was and thought this might be it? But I later found out it was not.  The rocks had white markers painted on them so you could find your way and the trail was pretty well marked.

Then I stumbled upon a spot where someone had made a campfire.  There was a beer can in the pit and as I walked, I found another, and another, and another.  I will never understand why someone could carry the heavy full cans in, but couldn’t manage to carry the light compacted cans back out? Thankfully, I had a few extra plastic bags in my backpack so I set out to cleaning up along the way.

I even found some glass lying about. So sad.

I continued on the trail and looked up to see a cell phone tree.  I had seen a few of these in my adventures and thought they were a really great idea and wonderful effort on the part of the cell phone companies.  You may have seen one and not noticed, or maybe you did, either way, when you see a tree that looks something like this, take a closer look.

I got back on the trail and continued on noticing great views all around. I found another plaque on wetland trees and stopped for a rest on one of the lovely benches along the route.

It looked like there had been a fire up here as many of the trees were very sparse and some looked burnt.  I did a bit of investigating and found out there definitely was a fire in July of 2012.  The cause was unknown but they state that it was not natural factors.

There was also a fire ban on at the time, another demonstration of how important it is to obey these types of bans when they are on.  When brush is dry, fire can spread very very quickly and destroy so much.

I could also see some of Lake Muskoka and Lake Joseph in the distance.  I continued on.

I believe I had made my way to the lookout point and I had an amazing view here. There was also a plaque marking the spot. It read:

Big thanks to Lloyd Ross and Bruce Evans for their donation!!! It is greatly appreciated for sure!

There was a big rock at the lookout and as I was all alone, I took advantage and had a seat.

I sat and checked out the view and even pulled out my binoculars to see close up.  You could see forever and it was pretty amazing.  I felt very lucky and privileged to have this spot all to myself.

Eventually, my time alone came to an end and some tourists from Germany arrived to the lookout. I offered to take their photo, complimented the one hiker on her very cute Keen sandals and headed away from the lookout taking a loop trail back to the parking lot and finding more pretty areas en route.

I also found more trash, beer and wine bottles which I packed into my backpack and took out with the others I found earlier.

Some of the glass bottles were broken so I did my best to pick up the pieces without cutting myself.  Then took my big bag of junk and continued on the trail.

Soon after I met up with the original trail I came in on and then arrived back at the parking lot where my car was parked.

I really enjoyed my time at Huckleberry Rock and I hope it inspires you to go check it out for yourself one day soon!

Thanks for checking out my post. If you have any questions, comments or just want to say “hi” please leave a comment.

Hope everyone is enjoying their summer.  Just a few weeks left so make the most of it!

Great posts coming up on my last 2 visits to Algonquin Park! Please come back and check them out!

About the Author: Christina