I had not camped in Algonquin Park since February when it was minus 42.  It was time to change that.  My roommate Molly had been asking me to take her on a backcountry trip with me since we’d met, and this is the weekend we decided on.  As Molly has never backcountry camped previously, I didn’t want to do anything too difficult, plus we only had 2 days and one night to spend somewhere.

After doing some research, we decided on Kioshkokwi Lake, otherwise known as Kiosk. I had never been there, it looked like a nice area and there were still lots of sites available.  From Niagara, the drive was about 5 hours, but from Port Carling, it was only 2.5 hours.  One of the other reasons I hadn’t been there.

We arrived at the park around ten, registered at the office and unloaded the kayaks and gear.

Shortly after that, we were off to find a site!

We paddled for about an hour passing a bunch of sites. They were all good sites but we were hoping to get a bit deeper into the lake. I had been advised that this lake is really busy with motorboat traffic, people fishing and spending the day on the lake so I thought the farther in the better.  We stopped a a site that was quite perfect and I loved it.

It had a beach side, a rocky side, it was up on a hill with a nice breeze to keep the bugs away and had some nice level spots to pitch our tents.  Even though it was pretty awesome, we had seen a site on the map a bit farther down that was on an island. Out of curiousity, we both wanted to see it and knew we could risk getting this site, but took the chance.

After paddling for quite some time, we finally arrived at the site.  There was a motor boat parked at the site and it was very close to a cottage.  Guess now we knew?  LOL.  It took us another half hour to get back to the original site we stopped at, but thankfully it was still open.  We had some lunch first and then set up our tents and the site.

It was sunny and warm mostly, but the clouds kept rolling in and out,  threatening rain. It wasn’t supposed to rain, however, that is not what the clouds were saying to me. We eventually received a few showers, but nothing too heavy or annoying. It was actually refreshing as it was very hot out, somewhere around 35 with the humidex.

Molly caught some frogs and I set up my new tarp just in case the rain got worse. I’d always rather be safe than sorry, plus I wanted to use my new knots and my new tarp!! LOL

I used one of my newly learned knots from my Level 2 sea kayaking course to attach each corner. I was totally loving this knot!  I layed the tarp on the ground, put the ropes in the trees and tied them, then attached the ropes to the tarp and put the slider knots on and when all 4 were done, just moved the sliders to the right spot so the tarp was where I wanted it.  Soooo easy. No tying, then untying, then retying the knots.  Easy peasy! Thanks James!!!

Once the tarp was set up, and the hammocks were hung and the firewood was cut up (thanks Molly!) we went for a swim and played in the water for a bit.

It was time to make dinner and I couldn’t wait!  I had brought nesting noodles this trip with some shrimp and asian sesame dressing.  We also added some garlic, green onions and fresh dill from the garden, and some chopped up asparagus. It was absolutely delicious!

After dinner we went for a paddle. There was a site across the lake from us that had a huge cliff, great for cliff jumping and Molly was dying to go.  It was a great site, but when we arrived earlier someone was already occupying it, seems they had just been visiting for the day.

The sun started going down shortly after and we decided to paddle to the swampy area we’d seen earlier to see if we could spot any wildlife. The trip turned up nothing but a few loons that I didn’t get any photos of, and a somewhat pretty sunset.

When we arrived back to our site I realized I hadn’t brought my skewars that I use to roast marshmallows for s’mores so I sharpened up a stick with my knife and we were back in business. We sat by our small fire and enjoyed our snack and the total quiet of the lake.

Eventually we headed to bed and got a good nights sleep.  I woke up at 5am and went out to see what was up with the sunrise?

After sitting on a rock out front of our site for a bit I realized that the sun was coming up behind the trees from where I was sitting. I wasn’t able to see it from my location and needed to jump in the kayak to go get a better look.

Once I was out in the middle of the lake the view was much better! I got a few shots and played with the sun a bit.  This is my new solar light! What do you think? LOL

I hung out on the calm water for a bit longer but didn’t get too many good pictures. Some sunrises are more amazing than others, but you don’t know unless you wake up and see for yourself.

At 7, there wasn’t much going and a few boats were out on the lake. My peaceful time was up so I headed back to bed for an hour or two.  I had only gotten about 5 hours sleep and could use a bit more.  When I woke up later, Molly was up reading out on the rocks.

I got up and we made some hot chocolate with baileys in it.  It was so good and hit the spot. Then we got breakfast going.  The plan, egg sandwiches with cheese. YUM! 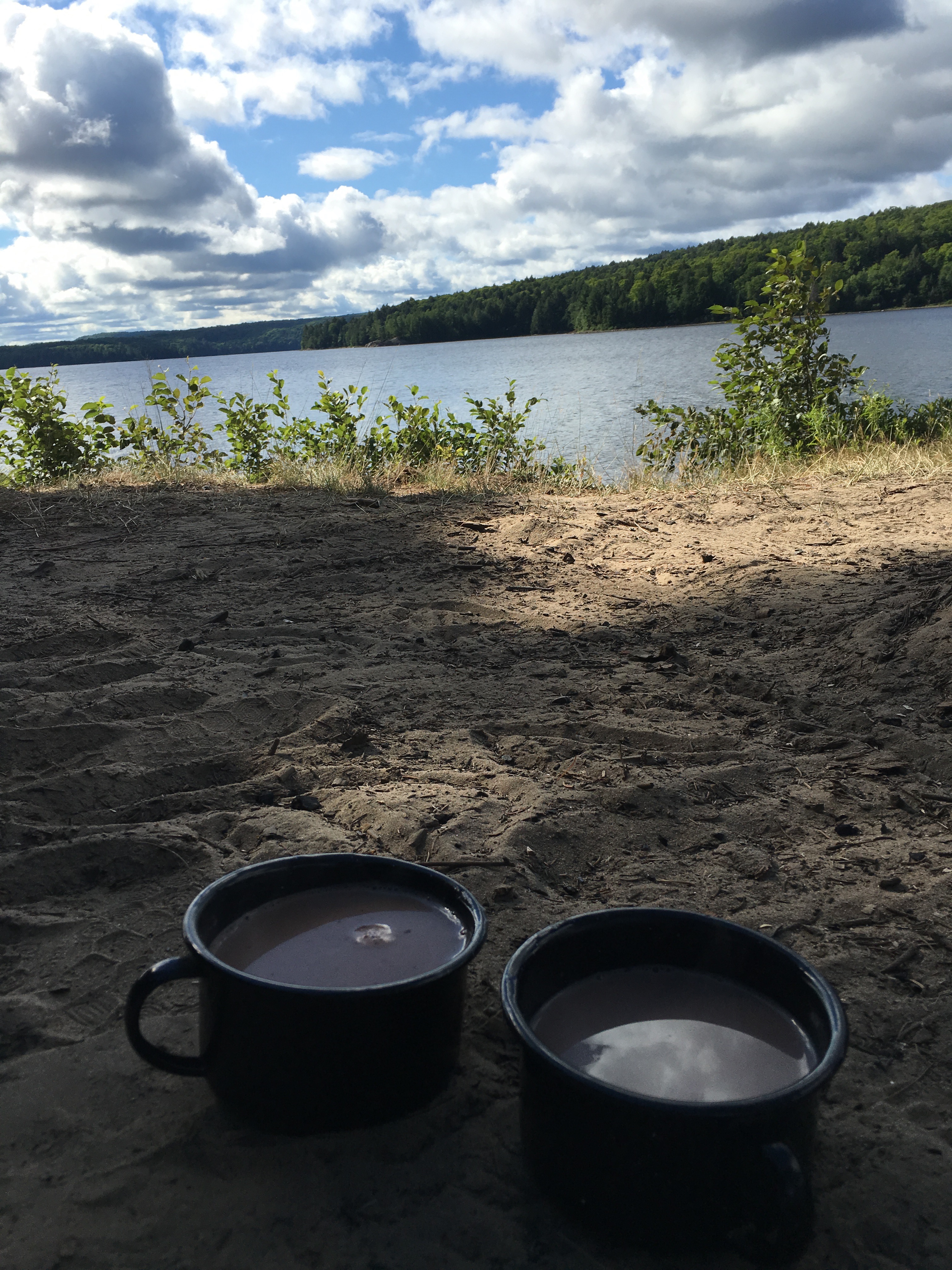 After breakfast we lounged around for a while. The sun was out, it was hot,and it was a gorgeous day!

After lunch we finished packing up the site.

It looked just a bit better than it did when we arrived. We only had to pack out a bit of trash that was there from the last visitors, one burnt up tin can and a few cigarette butts. I was happy to see there wasn’t much garbage.  We got in the kayaks and headed out to explore the lake for the day and find some more cliffs to jump off!

First we had to say bye to our perfect christmas tree that was on our site and then this little guy.  He jumped right onto Molly’s hand. Too cute!

The site above was our next stop.  Looked like a great place to jump into the water… so…. we did!

There’s Molly and here’s me! LOL

We also found this skeleton on the site. I thought it was from a bird but a friend thought it might be from a beaver? Anyone know for sure?

We paddled around on the lake checking things out and eventually, it was time to head back to the parking lot and inevitably, back home.

Oh! I almost forgot! This cool paddle was hanging on the tree on the site we were at.  Curious if anyone knows the story or origin of it? Let me know if so?  I thought at first it might be part of the Paddle in the Park Contest! hahaha. But it was way too old and looked like it had been there forever.

I am very happy I came to check out Kioshkokwi Lake! It’s a beautiful spot and I enjoyed my time there very much!

If you have any questions, comments or issues, please do not hesitate to contact me.

About the Author: Christina